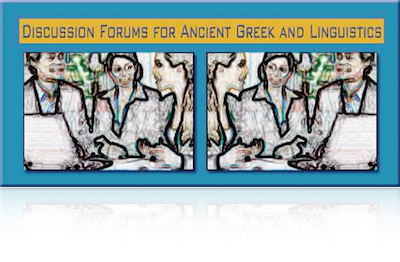 The Google Group, Ancient Greek Best Practices is a community of students and teachers using communicative methods to teach or learn Ancient Greek. You can join the forum, even if you are just getting started in your quest to acquire Ancient Greek as a living language. Little writing in Greek happens here, but plenty of discussion about what works and does not work in the living language classroom does.

B-Greek is an electronic conference designed to foster communication concerning the study of the Greek Bible.

The Classics List is dedicated to discussion of the Greek and Latin classical literature. The site also provides links to many other sites related to the classics. You can check the archives of past discussions here.

While the focus of this list is the classical literature, and not the language per se, topics related to Greek linguistics are sometimes a part of the discussions.

The Communicative Koine Greek Forum at KoineGreek.com is a place to discuss communicative approaches to learning Koine. In reading the posts there I have seen little use of Greek in the forum, but plenty of discussion of learning Greek in Greek and of resources for doing so.

The Linguist List Site: Resources for Linguists and Students of Linguistics

The Linguist List site provides access to many resources of interest to linguists and students of linguistics. While it is not directly concerned with Ancient Greek, the topic does come up on the list discussions from time to time and many of the resources available through this site will prove useful for students of Greek who want to broaden their knowledge of linguistics.

Textkit's Greek and Latin Forum has a section dealing specifically with Greek that covers learning everything from Homeric Greek to the Hellenistic Koine.