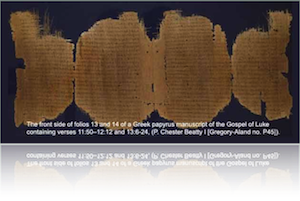 Almost 900 Greek manuscripts and some of the most important papyri, ranging in date from the first to the 18th centuries, are now included in the British Library's Digitised Manuscripts site. A guide to the Greek Manuscripts collections, including articles, videos and collection highlights, is available here. Articles and videos about the manuscripts are located here.

Alan Bunning's Center for New Testament Restoration has published digital transcriptions of almost every extant Greek manuscript containing portions of the New Testament up to year 400 AD. These texts are made availalbe online free of charge. Look up any GNT citation, and you will see the readings of the various early manuscripts for that text.

Center for the Study of New Testament Manuscripts

The Chester Beatty Library's collection includes papyrus manuscripts, rolls, codices and individual documents and ostraca, from Pharaohic, Graeco-Roman and Coptic Egypt ranging in date from 1800 BC to AD 800.

This article by Peter van Minnen provides a little history and a discussion of methods used for dating New Testament manuscripts.

The Digital Nestle-Aland is the electronic form of the standard scholarly edition of the Greek New Testament. In addition to what is avalable in the printed edition, transcriptions of important manuscripts are provided by the Institute for New Testament Textual Research at the University of Münster, Westphalia, Germany.

You can search the Duke Papyrus Archive, a repository of papyrii covering a wide range of topics and time periods at the Duke Libraries website.

The history of the Duke Databank of Documentary Papyri (DDBDP) and its merger in 2004 with Heidelberger Gesamtverzeichnis der griechischen Papyrusurkunden Ägyptens (HGV) can be found at http://idp.atlantides.org/trac/idp/wiki/.

Papyri.info provides a search interface called Papyrological Navigator allowing quick access to a wealth of texts from the merged archives.

You can also search these same documents through the Advanced Papyrological Information System.

A site inspired by the Encyclopedia of New Testament Textual Criticism

Rich Elliott, inspired by the Encyclopedia of New Testament Textual Criticism, envisioned producing a digital version of the resource. Robert Waltz has done an admirable job of actualizing that dream, and what is now available is a compilation of a wealth of information about a wide range of biblical manuscripts and the discipline of studying them.

The site contains a great deal of usefull information for anyone getting started in the field of Textual Criticism.

The institute describes its mission as “to research the textual history of the New Testament and to reconstruct its Greek initial text on the basis of the entire manuscript tradition, the early translations and patristic citations.”

See the comments above under "Digital Nestle-Aland Prototype."

David Robert Palmer Has provided a useful listing of New Testament manuscipts much like the one found at the back of the UBS Greek New Testament, but with a number of added features, including links to images of the manuscripts.

Papyri.info (and the Papyrological Navigator)

Papyrology at University of Oxford

The University of Oxford houses websites for the Oxyrhnchus excavations, a faculty research effort to correlate newly received manuscripts with already identified texts, the work at Herculaneum, and the Ancient Lives Project, all of which include high quality images of the papyrii found at those sites.

The Princeton University Library has made available a small collection of images of papyri from a wide range of times and places.

The Tebtunis Papyri Collection (Information on manuscripts from a single location)

These pages contain information about the Tebtunis Papyri, the papyrus documents that were found in the winter of 1899/1900 at the site of ancient Tebtunis, Egypt.

The site is running on an insecure server, so I have not provided a live link. Just copy the address in dark red above and paste it into the address bar of your browser.

TRISMEGISTOS (Database of ancient texts between 800 BCE and 800 CE)

An interdisciplinary database of papyrological and epigraphical resources covering documents created between roughly 800 BCE and 800 CE.

The University of Michigan Papyrus Collection

While little of the University of Michigan’s Papyrus Collection is currently visible online, the web site does provide an interesting basic introduction to papyrology. The University of Michigan is a member of a consortium of American universities intending to bring their papyrus collections online through the APIS project, so we can hope to have many of them accessible in the future.